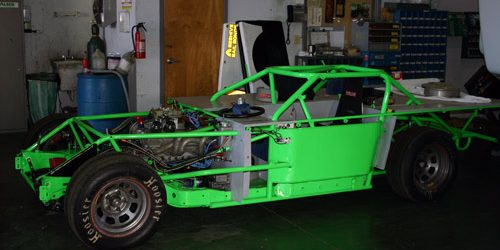 Rocky Mountain Raceway driver Dennis Thomas races, and often wins, in his rebuilt 1978 Malibu. After getting into the sport in 1996 when a friend asked him to assist in preparing a car for racing, Thomas has set the track record at RMR, won many races, and earned a national eighth-place ranking in his Super Stock class.

“I love racing cars and I have the need for speed,” Thomas said. “It’s like this: You drive three-eighths of a mile, at 85, 90 mph in 17 seconds, make two U-turns and try to do it with 20 people in front of you. It’s like a high-speed chess match.”

Thomas has competed in a 1978 Malibu that he built and rebuilt from scratch. A regular car in its previous life, the red machine had close to 400 horsepower and rode smoothly. The car was owned by Garlan “Red” Hale and Hunter Machine in West Valley City. Hale and Thomas teamed up in 1999.

The duo hit the rough roads in 2001 when Thomas only won four of 16 races and experienced repeated flat tires. After the events of Sept. 11, they also lost their sponsor. Because of the lack of funds, Thomas wasn’t going to race that year. At the last minute, four new sponsors came forward: Barlow’s Landscaping and Snow Removal, Bonneville Driving School, Check City, and A&L Towing. After that their luck was different. Thomas won five of six races and gained the national ranking.

Of the countless races Thomas has run, his highlight came in June 2001 when he won a 100-lap race against NASCAR Winston Cup star Dale Earnhardt Jr. “I won the race by a full lap. Then I got to meet him and get a photo with him; it was cool,” he said. Thomas also said with his success, the racing competition in Utah is more fierce every year.

“There are better drivers and better tracks, but I’ve gone from a wannabe to a real racer, so bring it on,” he said.